It was confirmed on Wednesday that the World Cup winner had passed away after suffering a heart attack, prompting tributes to flood in from across the world.

Portugal icon and five-time Ballon d’Or winner Cristiano Ronaldo was among those to grieve the loss of the “eternal genius” on social media.

Barcelona star Messi took to Instagram to hammer home the reminder that the legendary figure will never be forgotten.

“A very sad day for all Argentines and for football. He’s left us but he hasn’t gone, because Diego is eternal,” he wrote alongside pictures of the two of them together.

“I’ll keep all the great times I enjoyed with him and want to take the opportunity to send my deepest respects to all his family and friends. RIP.”

Messi was long seen as the heir to Maradona’s throne as the king of Argentine and indeed world football.

Even the former Napoli and Boca Juniors maverick highlighted Messi as his replacement in 2006, telling reporters: “I have seen the player who will inherit my place in Argentine football and his name is Messi.

Messi followed in Maradona’s footsteps by wearing the No. 10 jersey at Barcelona and then donned the same number for Argentina as well as the captain’s armband.

Messi played under Maradona when the latter spent two years as the coach of the Argentina national team. 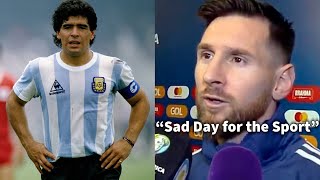 He guided the Albiceleste to the 2010 World Cup, in which Messi scored four goals as the team’s captain before they were eliminated by Germany at the quarter-finals stage.

But while Maradona led Argentina to World Cup success in 1986, Messi has been unable to claim the trophy with the national team despite scoring 71 times in 140 caps.

The closest Messi came to lifting the trophy was in 2014, when Argentina fell to Germany in extra-time in the final.