Another robbery involving criminals traveling on motorcycles and driving up to and into the premises of their victims and taking their belongings has occurred, this time in Mona, St Andrew. 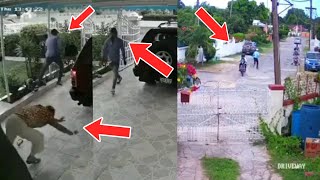 The attack is one of the latest in a scheme involving at least five to six criminals traveling on motorcycles, and at least one traveling in a dark grey motor vehicle.

Reports are that the vehicle is used to drive around and identify potential victims.

Indications are that the men involved in the robbery scheme carried out an attack on an unsuspecting victim on Princess Alice Drive in Mona.

In a three-minute video of the incident, men on a number of motorcycles and one on foot, stopped outside a home before some rushed into the premises.

The men subsequently emerged after completing their exploits, and made their escape.

A vehicle that was parked in the area is later seen slowly driving away after the riders flee from the area.

Sources said the men travel around dressed as working individuals to avoid drawing the attention or suspicion of the police or their potential victims.

There has also been another reported case of a similar type of bike robbery in Three Oaks Garden area of S Andrew.

Gunmen Rob,Abducted & Beat Man “Throw Him In Gully To Die” (Video Inside)